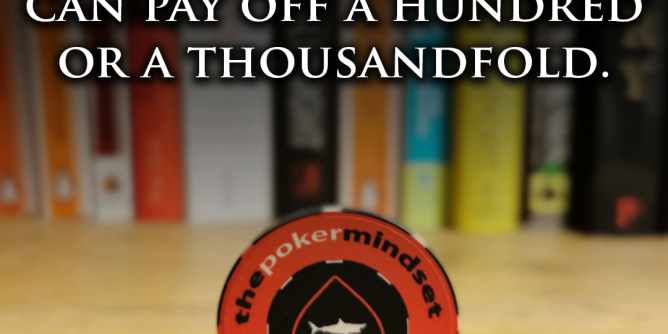 Reading is kind of insane when you think about it. Someone has likely spent hours a week, probably for years, researching and compiling the best available information on one subject, and you get 80% of their combined knowledge in a couple hours.

Reading is one of my favorite habits and it’s the one habit that all high-performers share. The benefits are amazing: if you read in the morning, you will start your day inspired and motivated, ready to crush your day and to perform at a high level during your poker sessions.

Therefore, I recommend reading for 15-30 minutes every single morning. I guarantee that it will improve your life and your poker mindset as well.

Here are the top 4 books I’ve read in 2021, what I’ve learned from them and my favorite quotes. Enjoy!

Note: This post contains affiliate links, which means that I make a small commission if you make a purchase, at no extra cost to you. I pay attention to only recommend books that I think are useful for my audience.

1. The Almanack of Naval Ravikant: A Guide to Wealth and Happiness

The Almanack of Naval Ravikant is one of my all-time favorites, it’s a book that I will probably re-read a couple of times. The content of this book is pure wisdom. It’s actually too much wisdom in such a short book.

Who is Naval Ravikant?

Naval Ravikant is an entrepreneur, philosopher, and investor who has captivated the world with his principles for building wealth and creating long-term happiness. The Almanack of Naval Ravikant is a collection of Naval’s wisdom and experience from the last ten years, shared as a curation of his most insightful interviews and poignant reflections. This isn’t a how-to book, or a step-by-step gimmick. Instead, through Naval’s own words, you will learn how to walk your own unique path toward a happier, wealthier life.

Here are my top 10 favorite quotes from the book:

“My definition of wisdom is knowing the long-term consequences of your actions.”

“You’re never going to get rich renting out your time.”

“Yes, I know some people aren’t necessarily ready to be entrepreneurs, but long-term, where did we come up with this idea the correct logical thing to do is for everybody to work for somebody else? It is a very hierarchical model.”

“Another thing that helps: I value freedom above everything else. All kinds of freedom: freedom to do what I want, freedom from things I don’t want to do, freedom from my own emotions or things that may disturb my peace. For me, freedom is my number one value.”

“A calm mind, a fit body, and a house full of love. These things cannot be bought. They must be earned.”

“Your real résumé is just a catalog of all your suffering. If I ask you to describe your real life to yourself, and you look back from your deathbed at the interesting things you’ve done, it’s all going to be around the sacrifices you made, the hard things you did.”

“As you know, most of the gains in life come from suffering in the short term so you can get paid in the long term.”

“Read what you love until you love to read.“

Getting rich is not just about luck; happiness is not just a trait we are born with. These aspirations may seem out of reach, but building wealth and being happy are skills we can learn.

So what are these skills, and how do we learn them? What are the principles that should guide our efforts? What does progress really look like? Click here to get the book from Amazon! (last time I’ve checked the Kindle version was at a very low price)

2. Shoe Dog: A Memoir by the Creator of Nike

In this candid and riveting memoir, for the first time ever, Nike founder and CEO Phil Knight shares the inside story of the company’s early days as an intrepid start-up and its evolution into one of the world’s most iconic, game-changing, and profitable brands.

Shoe Dog is the best autobiography book I’ve ever read, because I could resonate so much with the author’s personality.

Read my favorite quotes from the book:

“If you’re following your calling, the fatigue will be easier to bear, the disappointments will be fuel, the highs will be like nothing you’ve ever felt.”

“So that morning in 1962 I told myself: Let everyone else call your idea crazy . . . just keep going. Don’t stop. Don’t even think about stopping until you get there, and don’t give much thought to where “there” is. Whatever comes, just don’t stop.”

“I flat-out didn’t want to work for someone else. I wanted to build something that was my own, something I could point to and say: I made that. It was the only way I saw to make life meaningful.”

“But my hope was that when I failed, if I failed, I’d fail quickly, so I’d have enough time, enough years, to implement all the hard-won lessons. I wasn’t much for setting goals, but this goal kept flashing through my mind every day, until it became my internal chant: Fail fast.”

“Fight not to win, but to avoid losing. A surefire losing strategy.”

3. The Biggest Bluff: How I Learned to Pay Attention, Master Myself, and Win

“The tale of how Konnikova followed a story about poker players and wound up becoming a story herself will have you riveted, first as you learn about her big winnings, and then as she conveys the lessons she learned both about human nature and herself.” – The Washington Post

It’s true that Maria Konnikova had never actually played poker before and didn’t even know the rules when she approached Erik Seidel, Poker Hall of Fame inductee and winner of tens of millions of dollars in earnings, and convinced him to be her mentor. But she knew her man: a famously thoughtful and broad-minded player, he was intrigued by her pitch that she wasn’t interested in making money so much as learning about life. She had faced a stretch of personal bad luck, and her reflections on the role of chance had led her to a giant of game theory, who pointed her to poker as the ultimate master class in learning to distinguish between what can be controlled and what can’t. And she certainly brought something to the table, including a Ph.D. in psychology and an acclaimed and growing body of work on human behavior and how to hack it. So Seidel was in, and soon she was down the rabbit hole with him, into the wild, fiercely competitive, overwhelmingly masculine world of high-stakes Texas Hold’em, their initial end point the following year’s World Series of Poker.

“Do we see ourselves as victims or victors? A victim: The cards went against me. Things are being done to me, things are happening around me, and I am neither to blame nor in control. A victor: I made the correct decision. Sure, the outcome didn’t go my way, but I thought correctly under”

“Poker isn’t just about calibrating the strength of your beliefs. It’s also about becoming comfortable with the fact that there’s no such thing as a sure thing – ever.”

“Poker isn’t about money. There may be some present in all serious poker games, but it’s mostly just a way for the players to keep score. Instead, it’s about the process. It’s about decision-making. It’s about skill. That’s what makes the game beautiful.”

“It’s powerful advice. How often do we go off on someone for making a decision that we, personally, wouldn’t have made, calling them an idiot, fuming, getting angry? How much time and emotional energy we’d save if we simply learned to ask ourselves why they acted as they did, rather than judge, make presumptions, and react.”

“Focus on the process, not the luck. Did I play correctly? Everything else is just BS in our heads,” Erik tells me. “Thinking that way won’t get you anywhere. You know about the randomness of it but it doesn’t help to think about it. You want to make sure you’re not the person in the poker room saying, ‘Can you believe what happened?’ That’s the other people.”

Click here to read the full description and to get the new book!

4. Deep Work: Rules for Focused Success in a Distracted World

Deep work is the ability to focus without distraction on a cognitively demanding task. It’s a skill that allows you to quickly master complicated information and produce better results in less time. Deep work will make you better at what you do and provide the sense of true fulfillment that comes from craftsmanship. In short, deep work is like a super power in our increasingly competitive twenty-first century economy. And yet, most people have lost the ability to go deep-spending their days instead in a frantic blur of e-mail and social media, not even realizing there’s a better way.

What I’ve learned from Deep Work:

“Who you are, what you think, feel, and do, what you love—is the sum of what you focus on.”

“if you keep interrupting your evening to check and respond to e-mail, or put aside a few hours after dinner to catch up on an approaching deadline, you’re robbing your directed attention centers of the uninterrupted rest they need for restoration. Even if these work dashes consume only a small amount of time, they prevent you from reaching the levels of deeper relaxation in which attention restoration can occur. Only the confidence that you’re done with work until the next day can convince your brain to downshift to the level where it can begin to recharge for the next day to follow. Put another way, trying to squeeze a little more work out of your evenings might reduce your effectiveness the next day enough that you end up getting less done than if you had instead respected a shutdown.”

“Once your brain has become accustomed to on-demand distraction, Nass discovered, it’s hard to shake the addiction even when you want to concentrate. To put this more concretely: If every moment of potential boredom in your life—say, having to wait five minutes in line or sit alone in a restaurant until a friend arrives—is relieved with a quick glance at your smartphone, then your brain has likely been rewired to a point where, like the “mental wrecks” in Nass’s research, it’s not ready for deep work—even if you regularly schedule time to practice this concentration.”

“Ericsson notes that for a novice, somewhere around an hour a day of intense concentration seems to be a limit, while for experts this number can expand to as many as four hours—but rarely more.”

“To produce at your peak level you need to work for extended periods with full concentration on a single task free from distraction. Put another way, the type of work that optimizes your performance is deep work.”

Note: Read the 5 Life-Changing Books That Will Improve Your Poker Mindset article part one and part two.

Do you need a quick poker mindset boost? Click here to get my eBook called 25 Poker Mindset Tips Every Player Should Know!