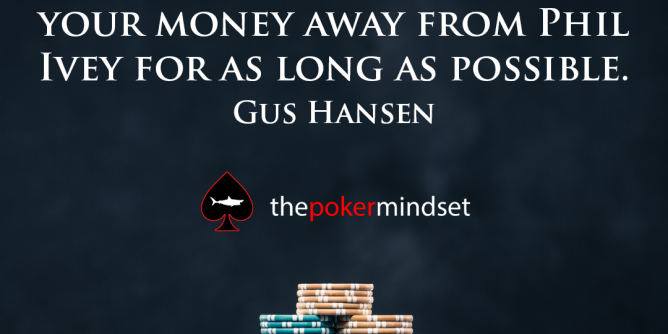 Having a good dose of humor can give you an extra mood boost, and it can add just enough joy to your day to overcome the challenges and difficulties in poker.

Take a much-needed break from your day to read the top 50 funny poker quotes. These quotes probably won’t improve your poker strategy, but I’m sure you’ll find them entertaining. The order is random. Enjoy!

1. “The object of poker is to keep your money away from Phil Ivey for as long as possible.” – Gus Hansen

2. “It’s not whether you won or lost, but how many bad beat stories you were able to tell.” – Grantland Rice

3. “Dogs are lousy poker players. When they get a good hand, they wag their tails.” – Unknown

5. “Poker has the feeling of a sport, but you don’t have to do push-ups.” – Penn Gillette

6. “Trust everyone but always cut the cards.” – Benny Binion

7. “Some poker players will complain about how unlucky they are until the end of time.” – Joe Ingram

14. “People would be surprised to know how much I learned about prayer from playing poker.” – Mary Austin

16. “If you can’t spot the sucker in your first half hour at the table, then you are the sucker.” – Matt Damon (Mike McDermott), Rounders 1998

18. “The beautiful thing about poker is that everybody thinks they can play.” – Chris Moneymaker

19. “I must complain the cards are ill-shuffled till I have a good hand.” – Jonathan Swift

20. “If you play bridge badly, you make your partner suffer, but if you play poker badly you make everybody happy.” – Joe Laurie, Jr.

21. “It’s weird being considered an expert at something that confuses me every single day.” – Erik Seidel

22. “A person should gamble every day, because think of how bad it would be to be walking around lucky and not know it.” – Robert Turner

23. “It never hurts for potential opponents to think you’re more than a little stupid and can hardly count all the money in your hip pocket, much less hold on to it.” – Amarillo Slim

25. “If there is one thing about poker that strikes me as odd, it is this. Poker is the only profession in the world where it pays to surround yourself with the biggest morons you can find.” – Phil Gordon

27. “I never saw a poker player’s money that I did not like.” – Oklahoma Johnny Hale

29. “I’d bust my own grandmother if she played poker with me.” – Jack Straus

30. “The only bad luck for a good gambler is bad health. Any other setbacks are temporary aggravation.” – Benny Binion

31. “If there weren’t luck involved, I would win every time.” – Phil Hellmuth

32. “If there ever was a player who was as good as Phil[Hellmuth] thinks he is, we’d never win a single hand.” – Doyle Brunson

34. “Luck favors the backbone, not the wishbone.” – Doyle Brunson

35. “Poker is a lot like sex. Everyone thinks they are the best, but most don’t have a clue what they are doing.” – Dutch Boyd

36. “They say poker is a zero-sum game. It must be, because every time I play my sum ends up zero.” – Max Shapiro

39. “When I run bad, I simply imagine some pokergods sitting somewhere in the universe, drunk or stoned, randomly distributing stupid coolers and laughing about me. And the more serious I take it the more they are laughing about me. Always makes me smile a little bit and stay cool.” – Bencb

40. “All losers exaggerate because they want you to know how bad they feel.” – Mike Caro

42. “Whoever coined the phrase ‘a man’s got to play the hand that was dealt him’ was most certainly one piss-poor bluffer.” – Jeannette Walls

43. “Most poker players overestimate their abilities; it’s like the old story about 95% of American men believing they are above average drivers.” – Ray Cooke

44. “Long may the ignorant believe it’s a game of luck” – Harry Demetriou

45. “Is poker a sport? – I don’t know, but I like any sport where you can eat a hot dog and drink a beer while you’re playing.” – Gabe Kaplan

46. “Always look for the silver lining. There is something good to be said for running bad: If you run bad long enough, everybody knows it and nobody asks to borrow money!” – Denny Axel

47. “If I had a dollar for each poker player who stuck to a disciplined strategy for a whole day, I could make a down payment on a deck of cards.” – Mike Caro

48. “Without a stake, poker doesn’t quite rise to the level of boring: to stir interest, one has not only to beat someone but to beat him out of something.” – Joseph Epstein

49. “Omaha is a game that was invented by a Sadist and is played by Masochists.” – Shane Smith

50. “Let me tell you how the Internet screwed up poker, okay? When a guy sucks out on the river, on the Internet, you cannot take the guy out in the parking lot and you cannot break his fucking knees.” – Deuce Fairbanks in The Grand(2007)

Note: Do you need a motivation boost? Click here to read the 40 Most Inspiring Poker Mindset Quotes From 2020!